For a long time, ActiveCampaign has sat in a useful middle ground between the general email marketing tools like Mailchimp, and far more expensive tools like Infusionsoft who include ecommerce features and transaction data.

All that is about to change.

ActiveCampaign have recognised that Infusionsoft’s claim to offer all the tools needed to run a business under one hood breaks down pretty quickly and has decided instead to integrate with other best-of-breed tools, starting with Shopify and WooCommerce, two of the most popular small-business ecommerce platforms.

Their approach is that the value is in the data to drive marketing activity, not the mechanics of processing orders and payments, and the new “Deep Data” integration takes this approach, allowing you to collect – and act on- an impressive range of data from your ecommerce store.

As a reseller of both Shopify and ActiveCampaign I was able to jump in and test the integration as soon as it opened for Beta testing yesterday….

The setup is simple, just pick Shopify  from My Settings > Integrations and authorise the Shopify store you want to work with.

Pick a list you want to push your store customer data into and enter whatever tag you want to identify your new contacts with.

So far so good, now just sit back and wait fora customer to place an order in your Shopify store.

A few extra fields are created against the contact record:

Company & Phone come in from the Shopify record, along with the billing address.

Details of the last order placed are also held against the contact including the order number and total price. 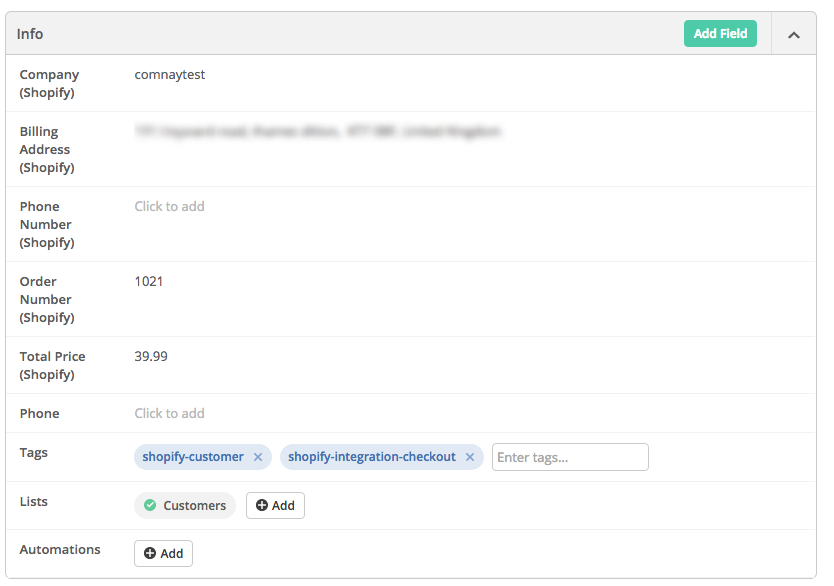 The real power however comes in the new “Ecommerce” tab in the contact record.

The top of the tab contains some summary data – totals of how many orders and how much money has been spent by each contact – very useful for calculating lifetime value and identifying your “hyper-buyers”.

Below that comes the detail on the individual record – containing the order number, value, shipping type, and products included in the order.

This is going to be an excellent set of data for working out cross-sell automations – “people who bought this also like that”.

How can we use the new ecommerce data?

The six-million dollar question. How do we get at the data to use in our marketing?

Thankfully, the excellent Conditions Editor for creating campaign selections and criteria for automations already include rules for getting at our data in a new “ecommerce” group. 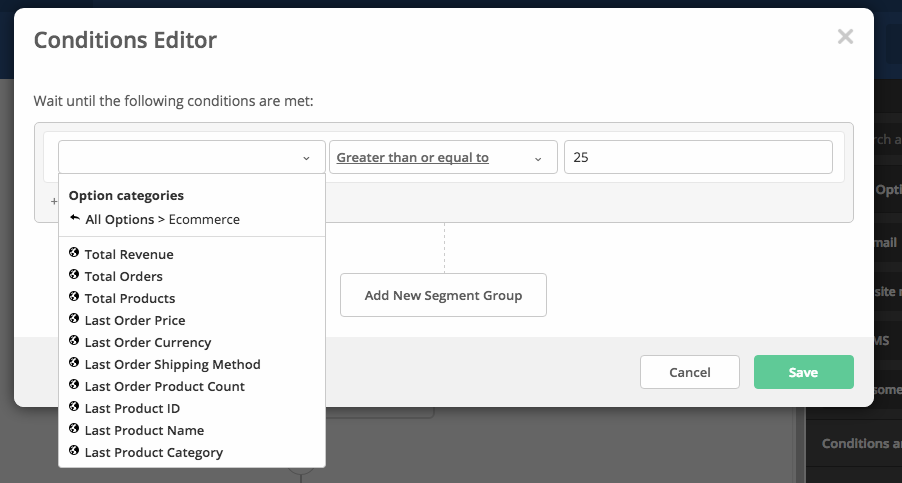 Triggers can be set from product names, prices, shipping, item quantities, as well as the cumulative spend of the contact. The range of automations that can be dreamed up from this list will have ActiveCampaign consultants salivating.

This is a game-changing feature for ActiveCampaign and in one step it leapfrogs the rather clumsy integrations of tools like Infusionsoft for typical ecommerce stores with larger product ranges.

The big hope is that access to the API won’t be far off, and as ActiveCampaign stands head and shoulders above its competitors in its API support I doubt this will be far away. That will open up a mass of new tools that can feed transaction data in to ActiveCampaign.

The other big area that needs addressing is pulling transaction data into the reports so we can get a real feel for which campaigns are driving revenue.

With ActiveCampaign’s recent record for rapid roll-out of new features, and the fact that they’ve recently had substantial investment to support this, I’m confident it won’t be far off.

If you'd like more inside secrets about how to build a profitable one-man-business: